Surprise, surprise … 15 people showed up on the day after the 4th for a gab fest with food at the Think Café. Not surprisingly, much of the talk was about Field Day. Here are some of the high (and low) lights:

Homer, K6HKT, reports that the LDG auto tuner he has previously shown to the group is finally installed. Regarding Field Day, he says he witnessed Steve (K6NT) & Ray (N6HE) operating CW together and marvels at the rhythm they can maintain.

Steve, K6NT, reports that Field Day was fun for him … the CW station made about 1300 Q’s. We reported to him that Gina’s (KF6MYQ) food was rumored to be the best in the ARRL LAX section.

Ivan, KB6ATT, also enjoyed Field Day, and “thanks to everyone who participated and helped out.” The phone part of the bands was challenging this year. He encountered numerous instances where he could hear another station but they could not hear him. (Others around the table, Doug included, agreed that this one way problem was not unique to us or to our location, others have noticed it too). He also mentioned that there had been talk of operating for the Californian QSO party (first weekend in October) and that he would be interested.

Sam, K1SL, is ‘here’. His ‘racing’ caddie has had an overheating problem when slowing down (!!) so he has installed two new fans under the hood.

Bruce, AG6BJ, has been battling an electrical interference problem at his home QTH, which affects all antennas except the double bazooka dipoles. He is continuing his investigations.

John, WA6SDK, enjoyed working the GOTA station at Field Day as well as working with Ivan on phone.

Bill, W6AJ, reports that unless he takes a test before the end of the month for an Airline Transport Pilot’s license, he will have to meet conditions that include going to a yet unspecified training school and being under 65 … so he is studying hard.

There was one test taker today for the GROL test (he passed both elements).

Doug, W6HB, updated us on the:

Ana, (XYL of W6HB) had a scare last month with symptoms resembling those of a heart attack. She also shared stories of the possible effects of the new “Common Core Curriculum.” That set off much reminiscing in the group (remember Dick, Jane, and Spot?).

Gary, N6HMR, reported that his grandson ran afoul of a zero tolerance policy on guns because he repeated some information on the guns on the Battleship Iowa! He enjoyed Field Day and is on the CW team (see above).

Scotty, K6ZNL, enjoyed setting up, taking down, setting up and taking down again, the GOTA station for Field Day. This started a discussion on the sling shot device used to put up the Windom Antenna (see the K6AA website for photos of Doug using the sling-shot). Scotty and Tom will be on a cruise and miss both the July and August meetings.

Tom, KJ6JPZ, also enjoyed getting on the air at Field Day.

Nick, N6EFI, enjoyed and thanked everyone for making Field Day a success. He is gathering ‘stuff’ for the White Elephant Sale on 7/18.

The group was a little smaller this year, but URAC’s Field Day 2014 ran smoothly as 2A having a single phone HF run by Band Captain Ivan KB6ATT and the usual CW run by Steve K6NT and Ray N6HE. Satellite Comm was again run by Jim KQ6EA, who made the majority of contacts on Sunday when satellite passes were more favorable. From the GOTA Station, run by Scotty K6ZNL, several visitors made their first ever HF contacts. Of the 30 members who participated, all but a few participated either on Phone or CW to make points for K6AA. 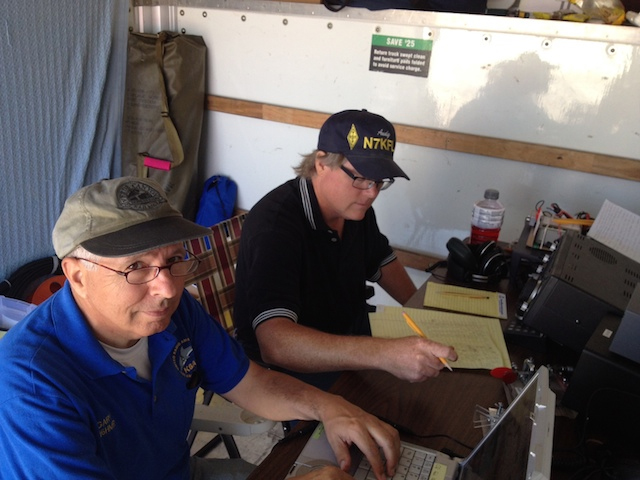 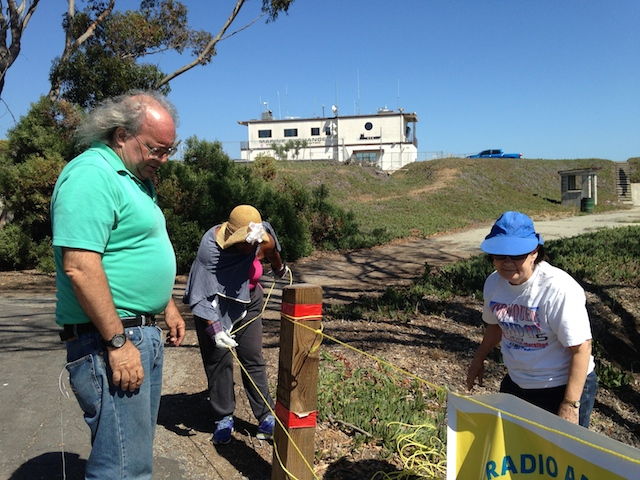 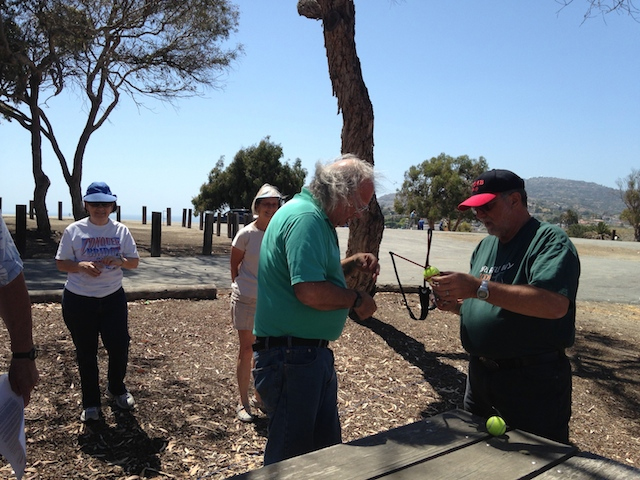 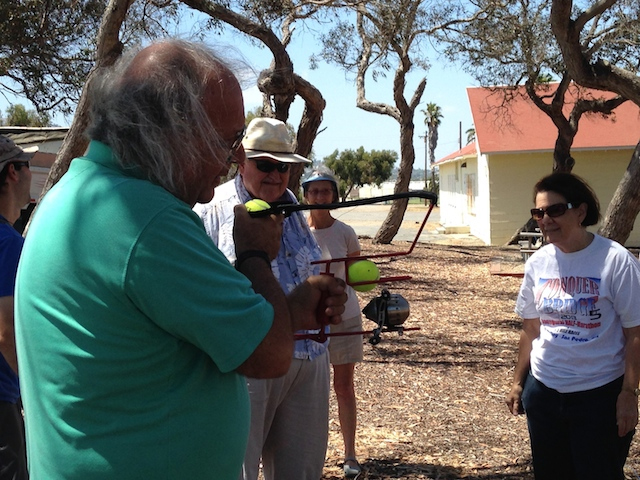 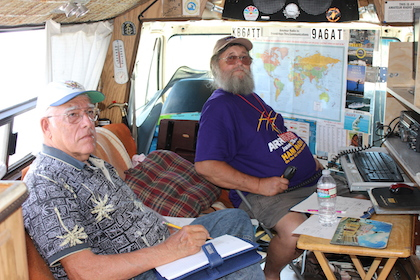 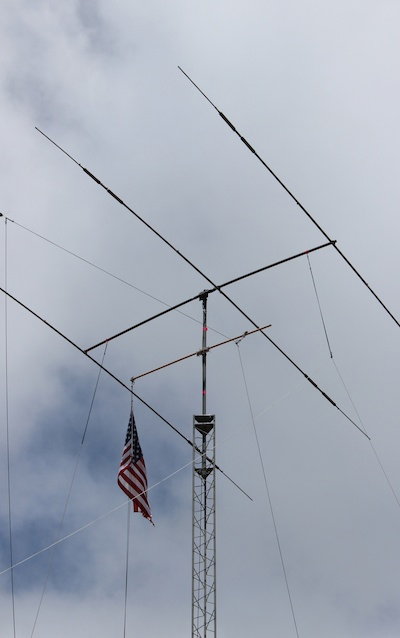 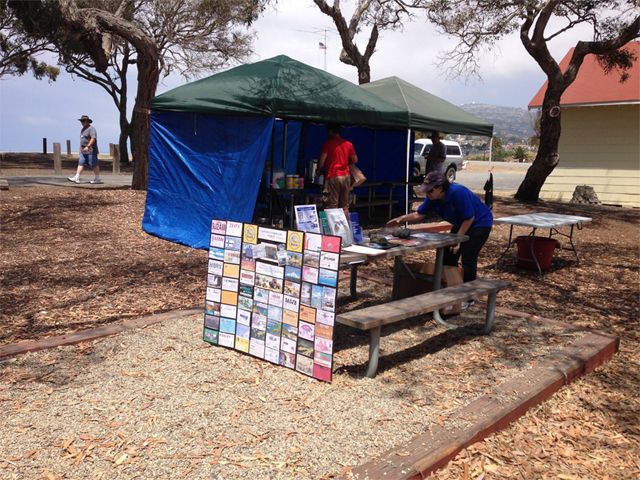 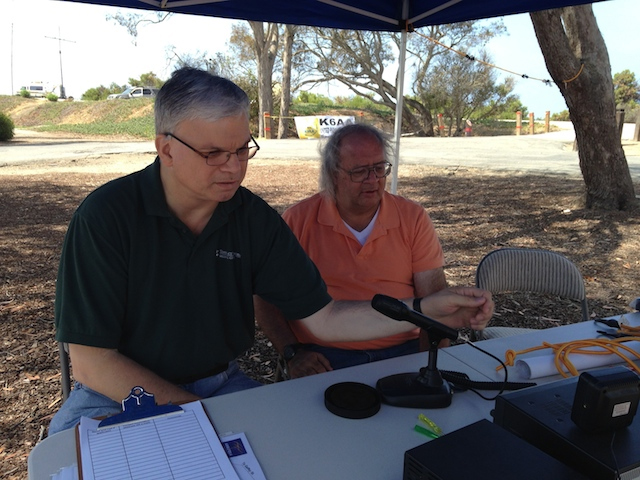 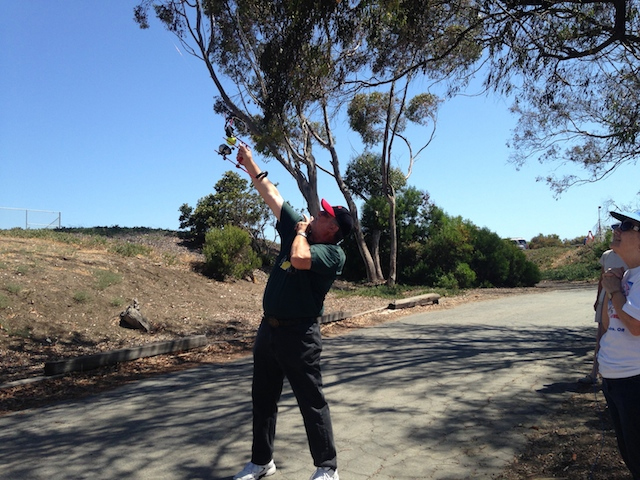 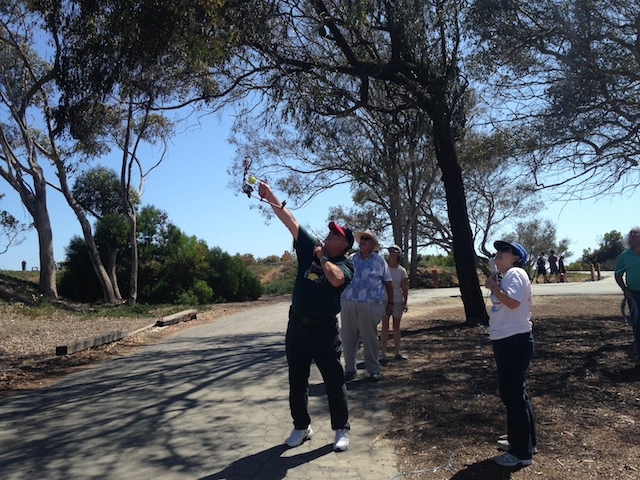 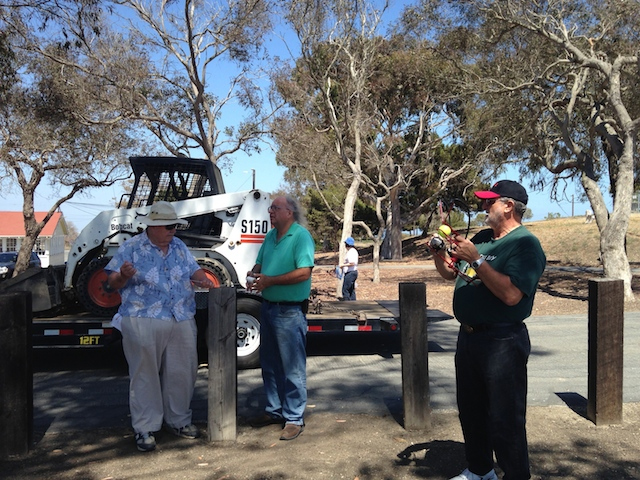 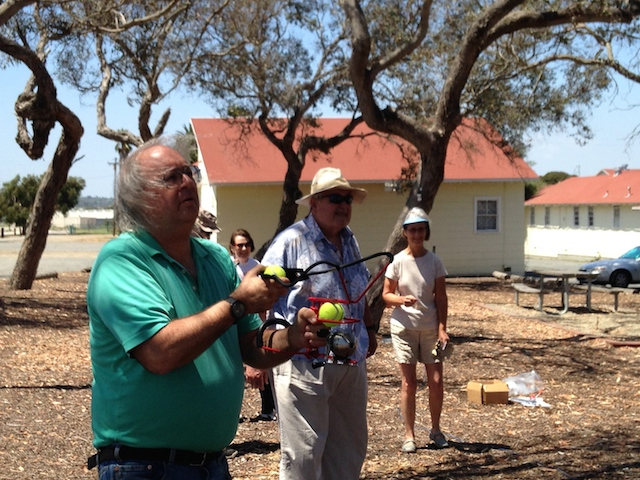 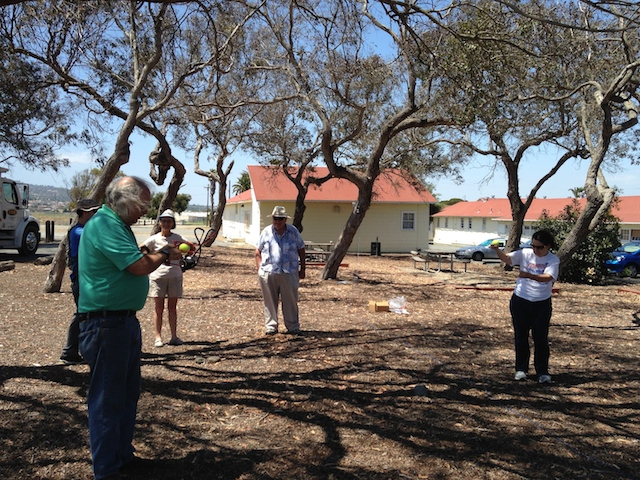 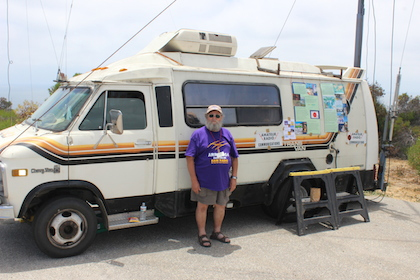 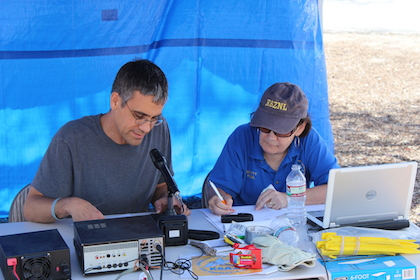 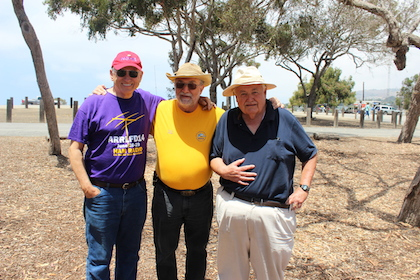 K6AA will be participating in ARRL Field Day this year at Angels Gate Park in San Pedro.  We will be demonstrating Amateur Radio using only emergency sources of power, using both CW (Morse code) stations and ‘phone’ (voice) stations.  We will also have a ‘Get on the Air” (GOTA) station where new or prospective operators can try out what it feels like to talk to other stations across the area, the nation and the world.  Come visit us … We will be on the air from 11:am Saturday Morning until 11:am Sunday Morning, but the BEST time to visit is between 1 pm and 6 pm on Saturday.  You can get more information about Field Day from the American Radio Relay League (ARRL) website at:   http://www.arrl.org/field-day 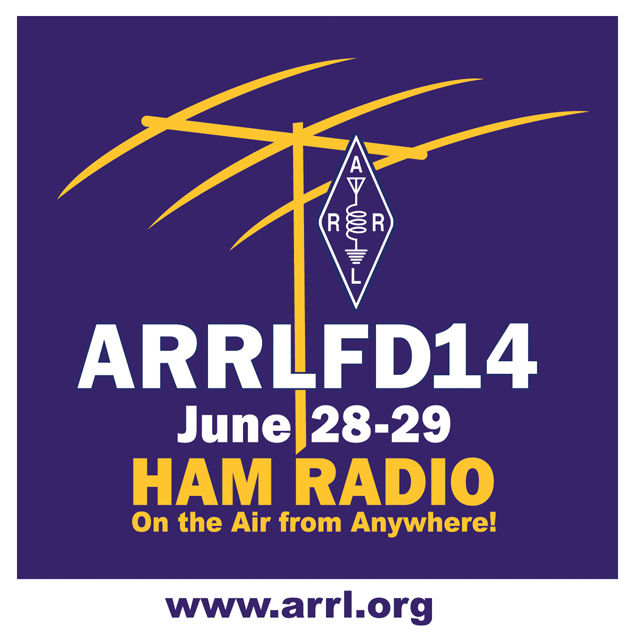 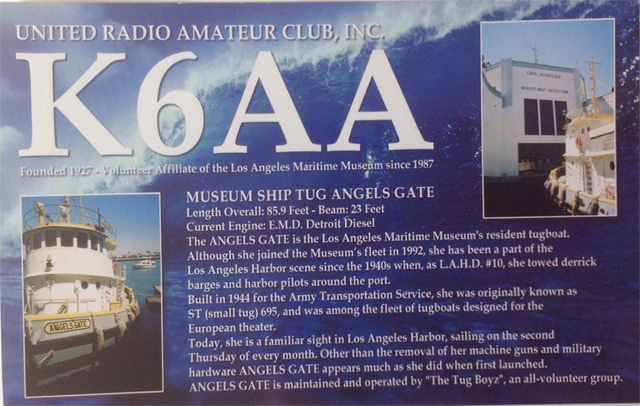 participated in Museum Ships Weekend June 7-8th, 2014.  We were on the air for 11 hours during that time, made 84 contacts and 14 other Museum Ships.  If you worked us and want the special QSL card please contact us per the directions in qrz.com.  Thanks to all the operators:  Scotty, John L., John R, Neal, and Tom.

Last Friday was the monthly URAC meeting at the Think Café. As usual, there was good attendance for dinner before the start. Brought to order at 7:30 PM, this night’s topic was SHOW YOUR SHACK, a program put togeter by Scotty K6ZNL. She arranged a slide show of station pictures which were then described by the owners. Everyone had a very interest shack, and some included their Antenna setup. There were 6 presenters for the program; it was a fun change for the meeting.

We had a good showing last Friday at the Think Café for dinner. When the meeting was called to order (about 19:20) URAC’s own Diana Feinberg, AI6DF, gave a great presentation of the IOTA station operation on Catalina Island. There were many pictures and diagrams of the set up at Two Harbors. Dianna was there with the PVARC Group, of which some were also URAC members participating. Her presentation started with the boat trip over, which was very smooth, and covered lugging all the equipment to the site once the boat docked. The set up of antennas and radios was very interesting. They had a visitor during the set up and take down … a Catalina Buffalo (or Bison) named George who showed up in many slides. He seemed interested in the goings on, though I don’t know if they made him a Honorary Ham?

They seem to have made a good many contacts, both in the US and some DX. All in all, fun was had by all. There was a tour of the place were they all stayed, which had a nice outdoor covered kitchen and communal Rest Rooms. Thank you, Diana, for a most interesting program. Great Job!

There was a good showing last night for dinner at the Think Cafe, which was followed at 7:30 PM by the URAC Monthly Club Meeting. Our guest speaker, URAC’s own David Ziskin AG6E, presented a very interesting program on Marine Radio. We learned of differant radios commercial ships and private vessels carry, how the various frequencies are meant to be used, and of some important channels that ships may or may not monitor depending upon their circumstances. He talked on the specifics of, and reasons for using, proper phonetics on the air. He also spoke of maximum VHF communication distances, the difference between line of sight and radio horizon, and provided the formula for determining that horizon limit (Horizon-in-miles = square root of [2 x antennae height-in-feet]). Sea Stories from his personal experiences brought the information to life, and rounded up a great program! Thank you, David, for a most enjoyable evening.